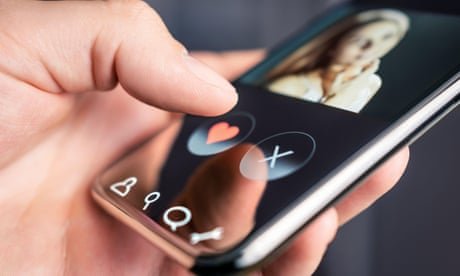 Disco. Brunch. Iced coffee. All beloved by the gay community way before they went mainstream. Similarly, no celebration of a decade of dating apps would be complete without acknowledging that the LGBTQ+ community ran to a different calendar there, too.

The daddy of our contributions to now-ubiquitous swipe culture is the infamous Grindr, launched in 2009 and originally designed to coordinate hookups between likeminded gentlemen tired of chatting on glitchy websites or over discounted cocktails in samey bars. Grindr's runaway success wasn't just down to cutting out various dating-world middlemen, it also fulfilled a genuine need for the LGBTQ+ community.

Marginalised people have always found sanctuary on the internet, scurrying to secluded corners to be better understood by those who shared their distinctive struggles, kinks or slightly nerdy hobbies; all things that might be mocked by the more conventionally attractive bantersauruses roaming our school corridors and haunting the chain pubs on our high streets. The walled gardens of early hookup apps also offered protection. There was no chance of barking up the wrong tree, or the immediate fear of physical violence. The rules of engagement were crystal clear and all but unspoken: the only prerequisite for entry was that you understood why you were there.

In 2011, the founder of Grindr, Joel Simkhai, launched Blendr, to include women and straight men, beating all-in apps like Tinder by a full year. "Are there women out there who want to semi-randomly meet and hook up with guys just because those guys are good-looking and located close enough to them that it would be convenient to do so?" asked HuffPost, incredulously. Imagine! The answer was not really. Not yet.

Complaining about the "state of the apps" is now a rite of passage for everyone, and LGBTQ+ users road-tested the uglier side of virtual interactions: from scolding each other for requesting nudes without a decent prelude; or imploring potential mates to "say more than just hi"; to enduring, then screenshotting and sharing, racism, fetishisation, fatphobia, transphobia and ageism, to name just a few. Calling out these behaviours may not have lasered them out of existence, but there's been a definite shift toward kindness, and an understanding that noxious creeps won't be tolerated.

Nostalgic romantics will tell you pulling is best done in real life. A ritual meant to be performed in packs, where chemistry can brew and sparks can flare and any losers can be weeded out by your supporting crew. All well and good if you're popular and live in a big city. Elsewhere, the LGBTQ+ scene is likely to be much reduced and underfunded, if it exists at all. Coming-of-age dramas are packed with brash, sprightly upstarts who jump on trains with all their belongings in a backpack, but for the shy and retiring, the financially stretched or those perfectly happy in the provinces, it's not an option. The apps provided a space for those still curious about what was out there and who might struggle with the cut and thrust of IRL courtship rituals.

Just as the squeakiest wheels always get the oil, the ripped torsos no doubt receive the most attention, but dating apps still forge communities among those who don't fit that aesthetic, and they've been an important place for anyone struggling with their sexuality, or unable to live authentically publicly. Toxic arseholes aside, there has always been a sense that there's someone out there for everyone and specialist apps carry a "take me as you find me" attitude that has perhaps been missing from real life interactions.

Away from the sneers of peers, people were more willing to give each other a go. You could shoot your shot and, as long as you'd been respectful, hold your head high in the face of rejection. Listing your (harmless) likes and dislikes might seem cold and distant to a casual observer, but those who might otherwise have been ignored slowly managed to find each other.

For lonely people, or those less able, less body confident, or less conventional, getting yourself in the room in the first place was always the hardest part. With dating apps, the room came to you - and so for once, you had the chance to own it.