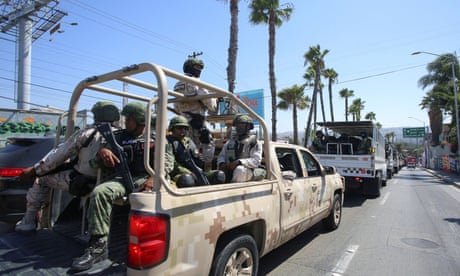 For Carlos Holguin it was supposed to be just another day of toil.

After leaving the factory where he works morning shifts in the Mexican border city of Ciudad JuÃƒÂ¡rez, the 24-year-old began his nightly routine last Thursday as a food app delivery driver.

Holguin was collecting a pizza when something hot pierced his left foot. Seconds later he saw people running for their lives. Still unsure what was happening, the delivery driver - who has a hearing impairment - threw himself to the ground as two more bullets struck his legs.

"Unfortunately, we live in a city and a country under assault from organised crime," Holguin said - as Mexico came to terms with the latest explosion of bloodshed in its traumatic modern history.

The shooting in Ciudad JuÃƒÂ¡rez came during a headline-grabbing week of violence that paralysed some of Mexico's most important cities, left more than a dozen people dead and raised fresh questions over the security policies of Mexico's nationalist president, AndrÃƒÂ©s Manuel LÃƒÂ³pez Obrador.

The mayhem began on 9 August, when security forces reportedly tried to arrest a senior leader from the country's most notorious organised crime group, the Jalisco New Generation cartel. The response from Jalisco hatchet men was fast and furious: in a series of brazen strikes they torched buses, cars and dozens of convenience stores as they rampaged across central cities such as Guadalajara, Guanajuato and LeÃƒÂ³n.

Forty-eight hours later the violence spread north as rival gangsters clashed in a prison in Ciudad JuÃƒÂ¡rez, just over the border from El Paso, Texas.

The violence, seemingly unrelated to the havoc in Jalisco and Guanajuato, soon spilled beyond the prison's walls as cartel gunmen hit a series of civilian targets, including the Little Caesar's pizzeria where Holguin was picking up an order.

"Terror," one Mexican journalist tweeted alongside graphic security footage of the moment police entered the bullet-riddled restaurant to find the floor smeared with blood.

The next day, Tijuana, roughly 20 miles (32km) over the border from San Diego, found itself at the eye of the storm, with its usually bustling streets emptying as bandits erected roadblocks and burned dozens of vehicles.

"They are literally torching the country," tweeted the newspaper editor AdriÃƒÂ¡n LÃƒÂ³pez, who said the direct targeting of civilians was unprecedented.

LÃƒÂ³pez Obrador, who was elected in 2018 promising to "pacify" his troubled nation with a controversial policy of "hugs, not bullets", claimed the attacks suggested those efforts were succeeding. He called the violence desperate cartel "propaganda" designed to project a false sense of power.

"I want to tell the people of Mexico to remain calm," said the president, who is known as Amlo, accusing conservative political rivals of "magnifying" the turmoil.

Yet the scale of the violence needed no amplification and offered a terrifying reminder of the muscle of wealthy and heavily armed groups such as the Jalisco cartel and the government's inability to respond, even in major cities.

While Holguin was being taken to hospital in Ciudad JuÃƒÂ¡rez, another civilian, 22-year-old Jovanni Varo, was gunned down while leaving a bank with his girlfriend.

"They went to withdraw some money for the week and were walking out when Jovanni just shouted at her, 'Run!'" said the victim's mother, Candelaria Varo. "When she turned around she saw he was injured and within seconds he was dead," she added.

The security specialist Ãƒâ€œscar Balderas said that far from being an isolated event, the wave of violence was the result of an ill-conceived security strategy still based on catching senior cartel leaders without targeting the finances or assets of their groups.

"Drug cartels are less and less drug cartels and increasingly criminal enterprises," Balderas said. "Rather than simply arresting criminal operators, these [police] operations need to be closing bank accounts, seizing property, confiscating buildings and weapons, above all high-caliber ones, that only the army is allowed to use."

Mexico's defense secretary, Luis Cresencio Sandoval, has defended his government's tactics, calling the attacks a counteroffensive against growing government pressure, including the deployment of hundreds of members of the national guard and a series of major operations and arrests. The defense chief claimed increasingly frail organised crime groups wanted to show strength, "when in reality these underworld structures are being gradually eroded".

Yet experts are unconvinced by such claims, with Balderas one of many to question the government's strategy. "An operation's success is being gauged by the number of people arrested when this is actually a very poor indicator," he said.

LÃƒÂ³pez Obrador's government has made some significant arrests in its anti-cartel crusade but such operations have not always gone to plan.

In October 2019, the son of Joaquin "El Chapo" GuzmÃƒÂ¡n, was briefly detained in CuliacÃƒÂ¡n but then freed on the president's orders after cartel gunmen brought the city to a standstill with a wave of attacks.

Balderas said such outcomes highlighted the lack of operational intelligence and political will when it came to fighting organized crime. Examples of success included the July arrest of the legendary drug boss Rafael Caro Quintero and the 2020 capture of the leader of the Santa Rosa de Lima cartel, El Marro.

Mexico's political opposition has called the August attacks acts of terrorism and alleged Amlo's government is losing control of the country.

However the violence is defined, the human consequences have proved devastating.

"We didn't ask for this situation, it isn't fair," said CÃƒÂ©sar Holguin, who said the long-term extent of his brother's injuries remained unclear.

"My brother is a decent person who supports his family and two daughters," he said. "He didn't deserve this."